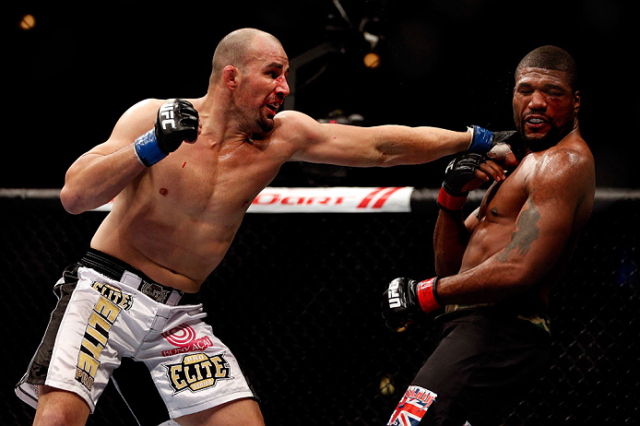 In the Chaos that is the UFC Light-Heavyweight Division Glover Teixeira and Misha Cirkunov face off in a defacto contender match this Saturday on FOX. Given the timing of Light-Heavyweight Title fight in a few months the winner of this fight might very well be the next “No. 1 Contender”. Cirkunov is coming off the first KO loss of his career to current Title Challenger Volkan Oezdemir in the opening frame of their fight. On the same night Misha was separated from his consciousness Glover too found himself looking up at the lights in the last round of UFC Stockholms Main Event vs Alexander Gustaffson.

This will be the first time Misha Cirkunov stands across the cage not just from a Top 10 LHW but a fighter who actually has the defensive wrestling and grappling acumen to keep the fight standing. Misha himself has shown power on the feet but will freeze for a moment whenever he is hit flush and then swing wildly in response. Provided Glover can display the basic but effective boxing combinations he demonstrated in his early UFC fights he will be able to pick Misha apart on the feet in boxing range. Coming off his first KO loss will have Cirkunov tentative in the early goings of the fight which will provide Teixeira with the much needed time to find his distance taking the lead early on. Since Misha’s grappling game is Judo based he will attempt to clinch up with Glover for the chance of a trip or throw but outside of the Champion not many in the division has such a powerful dirty boxing game that will make Misha pay for even initiating the position.

It must be said that Glover Teixeira is coming off a 5 round sustained punishment from Gustaffson before he was ultimately finished. While we may not know with certainty how Misha will respond coming back after his KO defeat we have already seen the Brazilian come back from a show stopping finish. Post Anthony ‘Rumble’ Johnson Knockout Glover came back against Jared Cannonier and played the safest game plan he could to avoid Cannonier’s power largely wrestling him for 3 rounds picking up the decision victory. Glover Teixeira will always play to his strengths which can’t be said about Misha who many times has chosen long exchanges on the feet rather than taking the fight where he holds the advantage over many of his opponents.